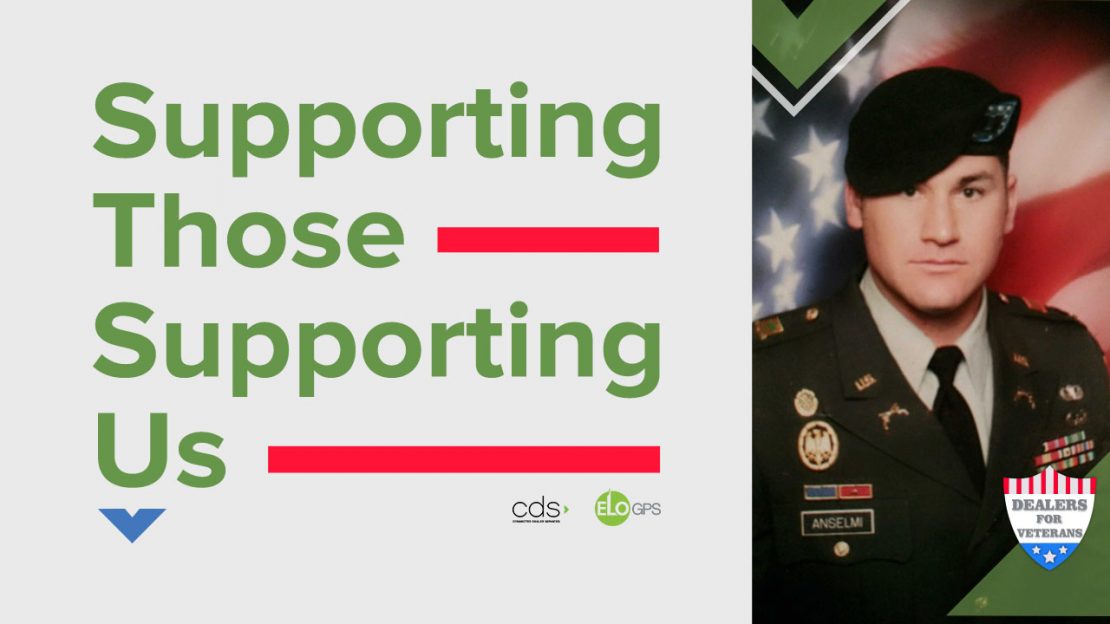 When returning from deployment and looking to re-enter the workforce, veterans bring with them invaluable skills, including leadership, teamwork, and problem-solving under pressure, just to name a few. Connected Dealer Services (CDS) is committed to supporting initiatives for retired servicemen and women and is honored to employ a number of veterans – including Elo GPS Account Manager, Ryan Anselmi.

Ryan spent over six years in the US Army where he served as executive officer and 2nd in command of a 225 US Soldier and Korean augmentee unit, as well as oversaw the comprehensive training and development of over 2,500 Iraqi Police. After only 30 months in service, Ryan was promoted to Captain soon after his 25th birthday.

But with great service comes the even greater turbulence of life after the war, where many veterans struggle with mental health and wellness after returning home. In the summer of 2020, Ryan shared the tragic news that he had lost two more of his brothers – also fellow veterans – to suicide during the height of the COVID-19 lockdowns. After hearing his story, the CDS leadership team took immediate action to find a way to give back and support the veteran community. Thus, the Dealers for Veterans program was born.

The Dealers for Veterans program focuses on supporting three pillars of need within the veteran community: employment services, military mental health and wellness, and wounded warriors and their families. At the start of the campaign, CDS selected three non-profit partners to support under each pillar: Hire Heroes USA, Hope For The Warriors, and Fisher House Foundation. After an immensely positive response from both customers and partners, CDS is excited to announce that the program will be continuing throughout 2021.

We had the opportunity to speak to Ryan about his experience in the field, the importance of military mental health, and how communities can get involved in supporting veterans. Read his full story below.

Many Soldiers find themselves in situations where they are exposed to compounded stress on multiple fronts: homelife, finances, the enemy, their fellow soldiers, their leaders, and themselves. When I was stationed at Fort Campbell, the 101st Airborne Division was the most deployed division in the Army – and the suicide rate was directly proportionate.

There is a stigma associated with military mental health issues being a sign of weakness in the military, especially in highly coveted and respected service units with a lot of tradition and pride. Soldiers are afraid it will adversely affect the perception of them and their careers. As a result, many suffer in silence and cope through self-medicating or other self-destructive behaviors

With maybe one exception, every Soldier I’ve known that has committed suicide came as a complete shock, with little to no indication, despite all the training we receive as Army leaders to recognize the warning signs. They had successful careers and future plans. In the days leading up to their death, they functioned normally by socializing, attending events, and performing their duties.

To this day, the public misperception of a visibly whacked out PTSD veteran who acts abnormally for months and finally snaps and hurts himself or others upsets me. In my experience, there were never suicidal ideations or no direct outcries for help. Often, these Soldiers were successful in their careers and life after service, making the situation difficult to understand.

Most of the time, these Soldiers had exhausted themselves by putting up such a front to divert others from recognizing the help they so desperately needed. Some blame the service culture, where I experienced first-hand numerous leaders talk from both sides of their mouth: they would encourage Soldiers to seek help in a group setting, then belittle them behind their backs if they did. The military did acknowledge this problem and internal programs do exist now as a result.

The issue is the lack of credibility, these programs are confidential and they answer to the chain of command. Rather than actually treating the Soldier, they serve as an assessment of the mental health problems’ impact on the Soldier’s ability to function and perform their duties within the unit. As a result, Soldiers are afraid their transparency will be reported to their leadership, further magnifying their problems and affecting their careers.

Additionally, these programs are overburdened, leading to short-term coping mechanisms rather than diving deep into underlying issues. They focus on the tip of the iceberg rather than what’s below the surface. Every Soldier wants an end to their pain, but it must be exposed and reckoned with confidentially and independent of the military with programs designed for the long term continuity of care to understand and confront the underlying issues. Only then is there hope for the healing process to begin.

Life After Service and the Road to Employment

When I chose the path of a commissioned Army Officer, everyone said I would be set up for life in my future endeavors outside the military. The unique skill set and leadership experience I gained would undoubtedly elevate me above my peers who simply went to college and graduated to an entry-level job.

When I exited the Army, I expected my phone to blow up with job offers. Like many of my peers, I applied to numerous positions daily but experienced the same feelings of hopelessness, worthlessness, and anxiety when I went five months without a job and my savings depleted. Many organizations gave lip service to being veteran-friendly but I continuously found myself lost in the recruiter blackhole. I was lucky just to get a phone interview.

I didn’t understand. I was a veteran Army Captain with a master’s degree, a bronze star, and since I was 22, had been in charge of anywhere from 40 to 225 people operating globally in dangerous environments while making a high-level impact. I had negotiated with tribal leaders, trained diverse populations, you name it. If I wasn’t a top candidate, who were these companies hiring? The problem was my resume was too military-focused and many civilians, or the computer software they used to vet candidates, didn’t understand how these skills translated from the battlefield to the office.

Soldiers are trained to be adaptable. I was a military police officer but one of my last assignments was as a battalion logistics officer. With no formal training, I successfully managed budgets, ran the maintenance program, oversaw property books, and supervised all supporting personnel. I’ve seen many military police officers go on to be great HR Managers and more. It seems many companies don’t recognize or value the cross-functional capability of Soldiers, and if you don’t have the requisite experience in that specific field, they aren’t interested. Hopefully, through programs such as Hire Heroes USA, Hope For The Warriors, and Fisher House Foundation, these organizations can bridge the gap to helping companies understand a Soldier’s value while providing the ongoing support they and their families need.

About Dealer for Veterans

For each new dealer partner onboarded into CDS’ Elo GPS lot management program, funds are allocated to the Dealers for Veterans program and equally distributed to our three non-profit partners each month. Since initiating the Dealers for Veterans program, CDS is proud to have donated $7,500 to our non-profit partners. For more information on the program details and how to donate to these outstanding organizations, head to elogps.com/dealers-for-veterans.